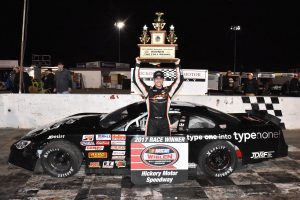 HICKORY, N.C. (Oct. 23, 2017) – Anthony Alfredo drove to victory Saturday night in the annual Fall Brawl 200 at Hickory Motor Speedway, his third Late Model triumph of the season. The 18-year-old Connecticut driver swept both ends of a CARS Late Model Stock Car doubleheader at Hickory in May for the other two victories.

After qualifying eighth for the NASCAR Whelen All-American Series event, Alfredo stuck to his pre-race strategy, which was to be patient and save his left-side tires for the second half of the 200-lap event. The race was split into two 100-lap runs and the teams were allowed to change right-side tires at the break.

Despite his plan to take positions only when possible, Alfredo was fifth just 40 laps into the event without pushing very hard. He advanced to third place 10 laps later and ran there until the lap-100 break. He took his right-side tires and the team made no adjustments so as to keep the handling of the car the same for the final 100-lap segment.

The plan was the same for the first 47 laps of the final 100, but at that point it was time to go. Alfredo picked up the pace on the final restart at lap 147, battling for five laps with Ty Gibbs for second place. He got past and settled in a car length behind leader Austin McDaniel for the next 20 circuits. With 25 laps remaining, Alfredo ducked to the inside of the leader off Turn 4 and raced side-by-side for two laps before making the pass. He was never headed the rest of the way and won by a straightaway.

Hickory Motor Speedway has been a very good place for the JR Motorsports Late Model team the past two seasons. Alfredo’s three victories in 2017 lead the way, and teammate Josh Berry has two more this season to make it five triumphs for the team. Berry won five races himself in 2016, including the Fall Brawl.

Next action for Berry and Alfredo is the Rodney Cook Memorial on Oct. 28 at Ace Speedway in South Carolina, a makeup date for a race rained out on Oct. 7.

“It feels really good to be back in victory lane this year, especially in a race as big as the Fall Brawl. I’ve had this race circled on my calendar since the start of the season. We’ve come close to getting this third win but have come up a spot or two short multiple times. I’m very happy to finally be able to put JDRF in Victory Lane after partnering with them earlier this year to raise awareness for Type 1 Diabetes. It was also our second race with Ceco Building Systems so to get a win with them is great too. I am thankful for their help along with my family and everyone at JR Motorsports. The crew did an awesome job and have worked hard all year. Hopefully we can carry this momentum into our last two races of the year and finish strong.”