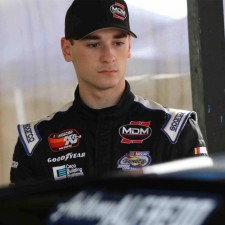 Hampton, VA, April 6, 2018 (Newswire.com) – Making his 2018 NASCAR Whelen All-American Series debut on a cold Saturday night at Larry King Law’s Langley Speedway in Hampton, Virginia with a team (Sellers Racing) for which he’d never raced, Anthony Alfredo started 13th and charged to a fifth-place finish in the first of two 75-lap features on his 19th birthday.

Unfortunately, in race two, lady luck abandoned the Connecticut native as contact from behind sent him into a spin.  He was hit by several other cars, causing heavy damage to his racer and an abrupt end to that second race for him before it ever really got started.

“Well, I was having a really fun birthday until that happened,” Alfredo commented, managing a smile despite the disappointing result in race two.  “We over-adjusted before qualifying and the car was loose in the corner, so we qualified 13th for race one instead of up in the top five or six where we wanted to. I was able to get up to fifth place and we were still able to manage our tires well enough to feel like we had something for race two. We just didn’t get the chance to show what we had.”

He wrapped up the night and the weekend by saying, “I hate it for everyone at Sellers Racing because they gave me such a fast car to race. I was hoping to bring the team a win, and I feel like the car was capable of winning.  We did get a fifth-place run in the first race and I learned a lot that will help me when we come back on April 28 for the NASCAR K&N Pro East Series race so that was good. We came here to learn the track and I feel like we achieved that.  I had a blast working with this team and cannot thank them, my marketing partners, my family and all of my supporters enough for making tonight possible.”