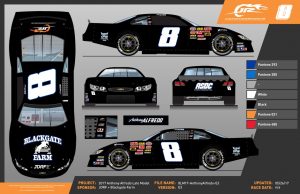 JDRF is the leading global organization funding Type 1 Diabetes (T1D) research.
CHARLOTTE, NC, June 23, 2017 (Newswire.com) – Rising star, Anthony Alfredo, announced a new affiliation with JDRF to use his racing platform to raise awareness of Type 1 Diabetes, also known as T1D.
There are 2 diseases that share one word — Diabetes. T1D is a commonly misunderstood disease, and Alfredo, along with JDRF, aims to help educate the public on T1D, and help raise funding for research to cure this disease that impacts the lives of more than 1.25 million Americans, and many more worldwide.
Beginning at the CARS Tour race at Orange County Speedway in Rougemont, North Carolina this weekend, Alfredo’s JR Motorsports Late Model will feature the JDRF logo as well as the slogan, “Type One Into Type None” that symbolizes the drive to one day find a cure for T1D.
Some facts about T1D:
• T1D is an autoimmune disease in which your body attacks and kills its own insulin-producing cells. Unlike Type 2 diabetes, it is not preventable, the cause is not known and currently, there is no cure.
• Insulin is a hormone that enables the body to metabolize carbohydrates which lower blood sugar – without it, you will die.
• T1D is a 24/7 disease that requires constant thinking and monitoring. It is a huge burden to manage this disease.

Anthony Alfredo on his affiliation with JDRF: “My cousin Morgan is a few years younger than me and was diagnosed with T1D just after her sixth birthday. I grew up seeing how she had to deal with the disease by pricking her finger, 10-12 times a day, to check her glucose level and giving herself insulin injections to manage her blood sugar. Morgan is now 16, and is a nationally-ranked
“Morgan is now 16, and is a nationally-ranked equestrian, and she’s a perfect example of how living with T1D doesn’t mean you can’t continue to do what you love.  My dad and I recently began talking about partnering with a cause through my racing career and T1D was naturally our first choice; so, I’m very happy to be working with JDRF on this
initiative.”
Alfredo’s next event is the CARS Tour Puryear Tank Lines-Thrifty Tire 300 at Orange County Speedway in Rougemont, North Carolina, this Saturday, June 24. The race will be broadcast live on CARSTour.tv.
About Anthony Alfredo:
• Anthony Alfredo, is an 18-year-old race driver from Ridgefield, Connecticut, who was selected to drive for Dale Earnhardt Jr’s JR Motorsports (JRM) team in the Late Model division in 2017.
• Anthony began his racing career at age six in go-karts. He raced both oval and road courses with equal success and multiple trips to victory lane and championships.
• He took five years off racing to play other sports before returning to racing at age 15 in a Legends car. He was then noticed by North Carolina-based Late Model Stock Car development team, Lee Faulk Racing, who offered him an opportunity in their program.
• In his first season of Late Model Racing with Faulk in 2015, Anthony posted 15 top-tens, 7 top-fives, 3 top-threes and a win in 16 starts.
• Alfredo was the 2016 Southeast Limited Late Model Series Pro Division Champion, and scored one win at Greenville-Pickens Speedway, 15 top-fives and 23 top-10 finishes in 26 starts.
• In 2017, Anthony will drive the No. 8 JRM Chevrolet in 20 Late Model events in the Southeast, competing alongside veteran Josh Berry in the No. 88 Chevrolet to solidify the team’s two-car lineup.
• Alfredo currently sits 2nd in CARS Tour points, just 3 points out of the lead, with 2 wins, 5 top-five, and 6 top-10s, from six races.
• 2018 plans include moving up to ARCA Series competition, with selected races in NASCAR’s touring series.
• Anthony Alfredo’s marketing partners include Blackgate Farm and ASDC (Alfredo Site Development Corp).
• Anthony will enter the University of North Carolina at Charlotte in the fall and will major in Engineering.

ABOUT JDRF:
JDRF is the leading global organization funding Type 1 Diabetes (T1D) research. Our mission is to accelerate life-changing breakthroughs to cure, prevent and treat T1D and its complications. To accomplish this, JDRF has invested more than $2 billion in research funding since inception. We are an organization built on a grassroots model of people connecting in their local communities, collaborating regionally for efficiency and broader fundraising impact, and uniting on a national stage to pool resources, passion, and energy. We collaborate with academic institutions, policymakers, and corporate and industry partners to develop and deliver a pipeline of innovative therapies to people living with T1D. JDRF’s staff and volunteers throughout the United States and six international affiliates are dedicated to advocacy, community engagement and a vision of a world without T1D. For more information, please visit jdrf.org or follow on Twitter: @JDRF.