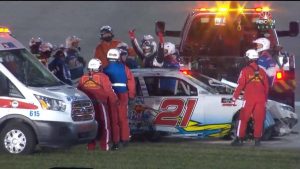 NBC Sports by Dustin Long - October 17, 2020, 9:37 PM EDT - Anthony Alfredo walked away after going upside down and sliding on his roof 28 laps from the scheduled end of Saturday night’s Xfinity playoff race at Kansas Speedway.

“That was the craziest thing I’ve ever experienced,” Alfredo told NBCSN’s Marty Snider. “That shows you how fast things happen in racing.”

The incident took place on a restart.

Alfredo restarted on the inside of the fourth row. He was behind Brandon Brown and in front of Justin Allgaier.

At the line, Allgaier dived down on to the apron. Alfredo went to block. Brown went down to block Alfredo.

As they headed toward Turn 1, Allgaier was on the apron, Alfredo partially on the apron and the track and Brown was on the track. The cars made contact, sending Alfredo up the track in front of Riley Herbst, who was running on the top lane.

The contact with the SAFER barrier sent Alfredo’s car on to its side. The car car eventually rolled over and slid down the track, coming to rest upside down.

Alfredo remained in his car until safety crews turned the car over. He was later evaluated and released from the infield care center.

Allgaier said on the radio to his team after the incident: “I should have bailed earlier. I just thought there was more time. I guess I thought I could make the transition, maybe. I don’t know what I thought. Just dumb move.”

Said Alfredo of the incident: “We’re all racing hard.”