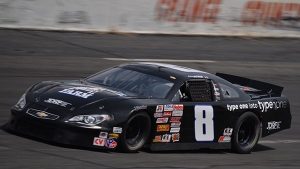 SOUTH BOSTON, Va. – Josh Berry is the only driver to have won multiple championships for JR Motorsports, and on Saturday night, he added the CARS Late Model Stock Car series crown to it. The 26-year-old Tennessee driver earned the title with a 10th-place finish in the SoBo 250 at South Boston Speedway, topping teammate Anthony Alfredo for the championship. Alfredo finished one spot ahead in ninth.

Layne Riggs, the point leader entering the season finale, exited early with a broken transmission after missing a shift on a restart and finished 21st, leaving the battle for the title between the two JR Motorsports drivers. Deac McCaskill, a distant fourth in the standings, won the race, but Berry and Alfredo had points in hand over him and battled between themselves for the championship. Berry, with bonus points for most wins and poles already locked up, entered the race a single point behind Riggs in second, and Alfredo was nine points out of the lead in third.

Berry, having seen Riggs break ahead of him, settled down and maintained his gap to rookie teammate Alfredo. He raced from seventh to 11th all night, battling a tight condition in his No. 88 The Decal Source Chevrolet most of the way. He considered pitting to adjust the car, but decided to stay out and defend the title from where he was. The result was the fourth Late Model championship for JR Motorsports.

Alfredo started 20th in his Ceco Building Systems/JDRF Chevrolet after some difficulty in qualifying, but when the green flag waved he was able to move forward. He hit the top 10 well before the halfway point, passing Berry along the way, but stalled out in seventh as the top groove became the preferred line. Having had to work his way to the front by dint of starting so deep in the field, Alfredo had worn out the front tires on his No. 8 JR Motorsports Chevrolet and could advance no further.

“I am really proud to bring JRM its fourth Late Model championship. I really want to thank Dale, L.W. (Miller), and Kelley (Earnhardt Miller) for the opportunity as well as all of our team and partners.  Thank you to The Decal Source for stepping up and being on the car the last few races.

“I am a pretty disappointed with how we ran tonight. We were back and forth with the balance in practice, but ultimately, we ended up being way too tight for the race. With the 99 (Riggs) having problems in the race, we just decided to try to keep ourselves in the best position we could to win the championship. Overall, we had a pretty good year in the CARS Tour, but we had some ups and downs.  We had four wins and four poles, but it seemed for a while that the races we didn’t win, we didn’t finish.  We had speed all year, but didn’t catch the breaks at times we needed. At South Boston, we didn’t have the speed to win, but caught a break and our season was enough. We are going to do our best to finish the last couple races we have this year strong.”

“We didn’t have a car that was quite good enough to win the race but we were capable of possibly running fourth or fifth if we could’ve gained the track position. Unfortunately, starting the race so far back forced us to race really hard in order to reach the front of the field. We had passed Josh and thought we could’ve worked our way into the top five but that was about the time when we had lost all our grip in the front tires and could only maintain from there. We finished the race ninth ahead of Josh but it was only enough to come home second in the championship. Although I wish we could’ve come out on top, I am satisfied with our results as a rookie in the series and in my first year working with JR Motorsports. I am thankful for the help of everyone at JR Motorsports as well as my family and partners for making this possible. The crew worked really hard all year to keep me in contention and to come home first and second as a team in the championship is pretty cool. Also, to compete with and come out right behind Josh who has had so much experience and success in these cars in my rookie year feels good. I’m proud of our effort and we still have a few other races left before the season is over so we will try to win those.”